Description: Morrianwe is a young woman with dusty blond hair and grey skin. She has soft features and could be considered beautiful if it wasn’t for the hard look she would often look at people with. Her hair hangs down her back in long dreads, having never been brushed or taken care off as more civilised people’s would do. She has icy blue eyes that’s sharp and could be described as intelligent, although she often appears almost childlike when asking for clarifications on subjects she’s never come into contact again. She stands straight, indicative of being raised by some humanoid creature, although in times of fear or extreme anger, she will growl and yip, sounding almost exactly like a young wolf rather than any kind of humanoid creature, showing that she was raised by more than just a humanoid being, but rather, having been accepted as a child into a wolf pack. During these times of stress, she would take on more aspects of the wolf pack, crouching down and staying on all fours, baring her teeth and curving her back as though she’s trying to make herself seem larger than she is while in that cramped form.
Personality: Morrianwe tends to be cold and distant towards others, escribing to a distinct hirarchy in her life, and would be differencial to whomever she considers to be the alpha of whatever party she’s joined with. If she deems no-one of the party to be of alpha material, she would continue to be cold and distant towards the members of the party, being confused towards who holds what position within the party. She rarely calls anyone by name, instead considering people to have similar positions in society as the pack she grew up in, calling them Predator, Prey or Scavenger. For the most part, she’s contemtuous of those she deems to have allowed themselves to become Prey, though she also holds out some hope that they could change their outlook and could raise their position, from Prey to Predator. She has great respect for those she deems Predators or Scavengers, if for different reasons.
She seems to have a defined definition for Prey, Predators and Scavengers, each usually, but not always, meaning their more common definition, though when she refers to people, she can also have another meaning. She has described Prey as being those that have allowed their hope and life to wane and would let others target them, treating them as broken individuals and have let themselves become less than people. She’s often derisive of them, and considers most of the people she encounters to be prey to one thing or another, whether it be people, or vice. Predators, she considers to be those that have maintained their hope and strength of being, even when faced with tragedies and pain that would break others. Scavengers seem to fit into neither of these brackets, though she seems to have a great deal of respect for them. They tend to be those that still have hope and strength, but are lacking in some area that excludes them from being Prey or Predators. They could be legitimate scavengers, living at the bottom of society, or they could be that they use guile, deceptions or other ways to hold a higher position in society while not being what she would define as a Predator. 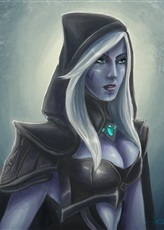