The man seems a little older than one would be when starting a career, especially in adventuring, but he seems to have the size for it. If the armor he wears is any indication, he’s a well-tones man, standing about 6 feet tall. Carrying the large amounts of metal that he has around has lead to him being rather strong, and the whip that hangs on his hip appears to be able to deal quite some pain to enemies. His chin is covered in a long and braided beard, his head covered in what appears to be a handkerchief of some kind, the man looks like he could have been a pirate in another life, had he not worn his armor. His eyes are green, and range from kind and caring when dealing with people, to hard and fearless when he tastes the air of combat. He’s got a rather angular face, and a single scar across his left cheek, ranging from his ear to his nose. Usually a kind and understanding person, Terrik is keen on seeking out wrongs and making them right. Be it a stolen coin-purse, or a corrupt King, this man sees it as his duty to Protect and Serve the men and women of the lower-class population. He is courage. He is might. He is fearless. He is The Shield-Bearer. 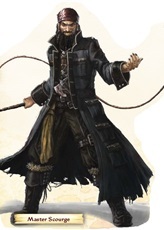